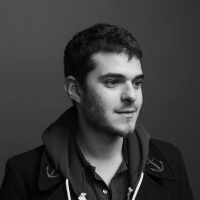 Joseph Safieddine isn’t the same person as Gabriel El Chatawi, the hero of his last album, but he could be. Born in France to a Franco-Lebanese family, and dividing his life between Paris, and Beirut and Tyre in Lebanon, the graphic novel “Yallah Bye” (Le Lombard 2015, Europe Comics 2017) very much represents his own story. Lebanon had already inspired the author to create two other albums previously: “Les Lumières de Tyr" with Xavier Jimenez (Steinkis, 2012) and "Je n’ai jamais connu la guerre" with Maud Begon (Casterman, 2013). But comics have been the author’s preferred means of expression for much longer still: starting with "Que j’ai été" (Les Enfants Rouges) as scriptwriter in 2010, he then published “Le Monstre" (Manolosanctis, 2010) with Tom, followed by "Paco" with Zaffiro and James Kaye, and "L’Homme sans Rêve" with Olivier Bonhomme (Manolosanctis, 2011), before finally offering his talents as a writer to the collective work “Les autres gens” (Dupuis). The publication of Yallah Bye certainly marks an important new step in his artistic career.