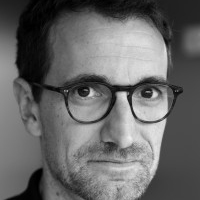 Thomas Cadène, born in 1976, seems to have led dozens of lives. After graduating with a master’s degree in law, he ended up going to work as a warehouse man, and then found a place in the universe of marketing luxury products – before becoming a waiter at a Parisian café. Finally he decided to become an illustrator, launching this career plan by working for wedding magazines. Around this time, he began to surf on the Café Salé internet forum, through which he met some of the cartoonists he would later work with as a writer, as well as Sebastien Vassant, with whom he organized The Smallest and Most Informal Comic Book Festival. He then began work on an ambitious, multifaceted project, mirroring his own life: over the course of two and a half years, he wrote, relentlessly, “Les autres gens” (Dupuis) – the first “bédénovella” made for the internet. This adventure gave him the opportunity to work with over a hundred illustrators, some of which would go on to become collaborators on other future projects, such as Joseph Falzon, Christophe Gaultier, and Grégory Mardon. Most recently, alongside Falzon, he has created the graphic novel sensation “Alt-Life” (Le Lombard; Europe Comics in English), a sci-fi/fantasy tale which has made a splash across the francophone press.